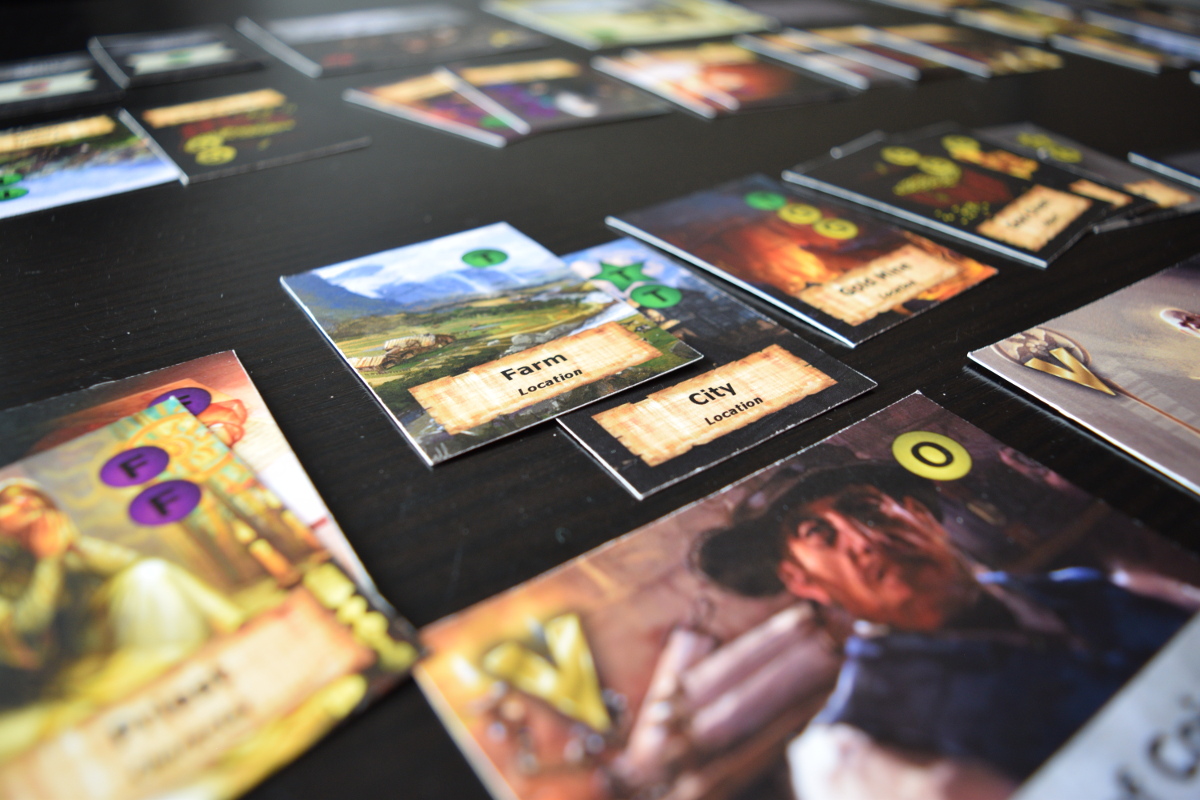 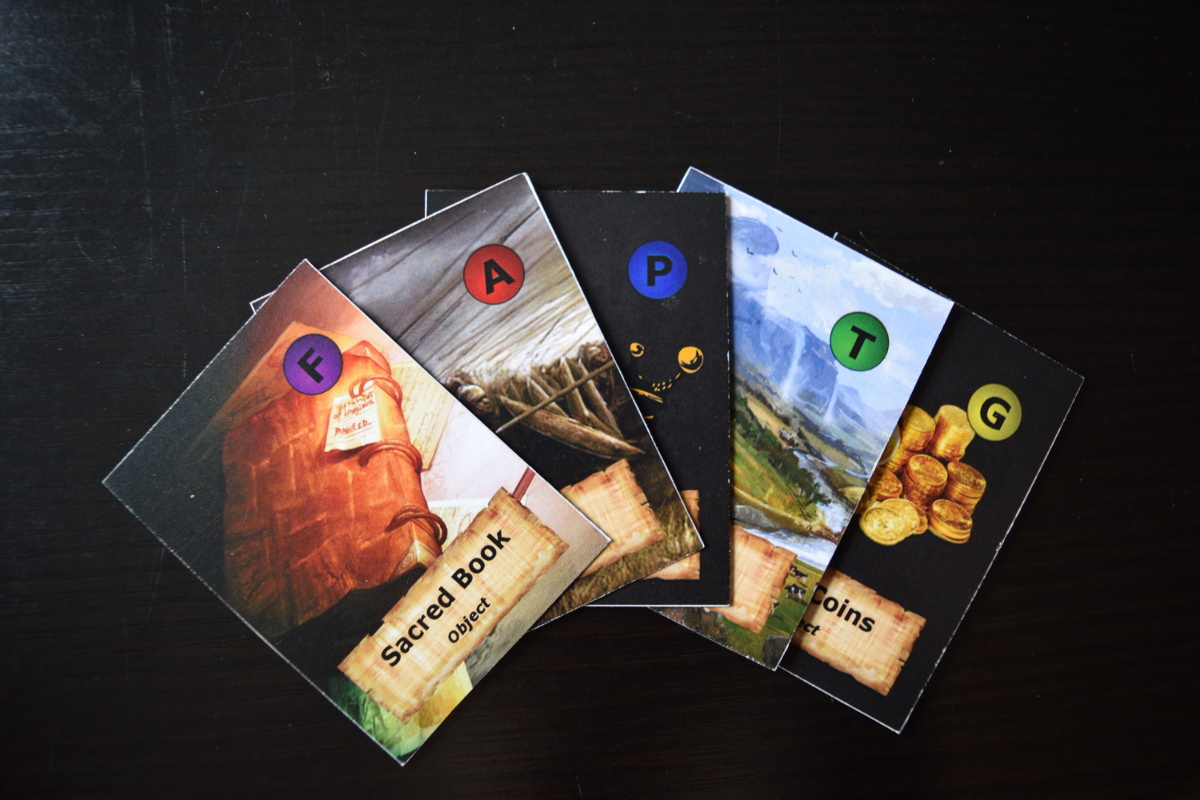 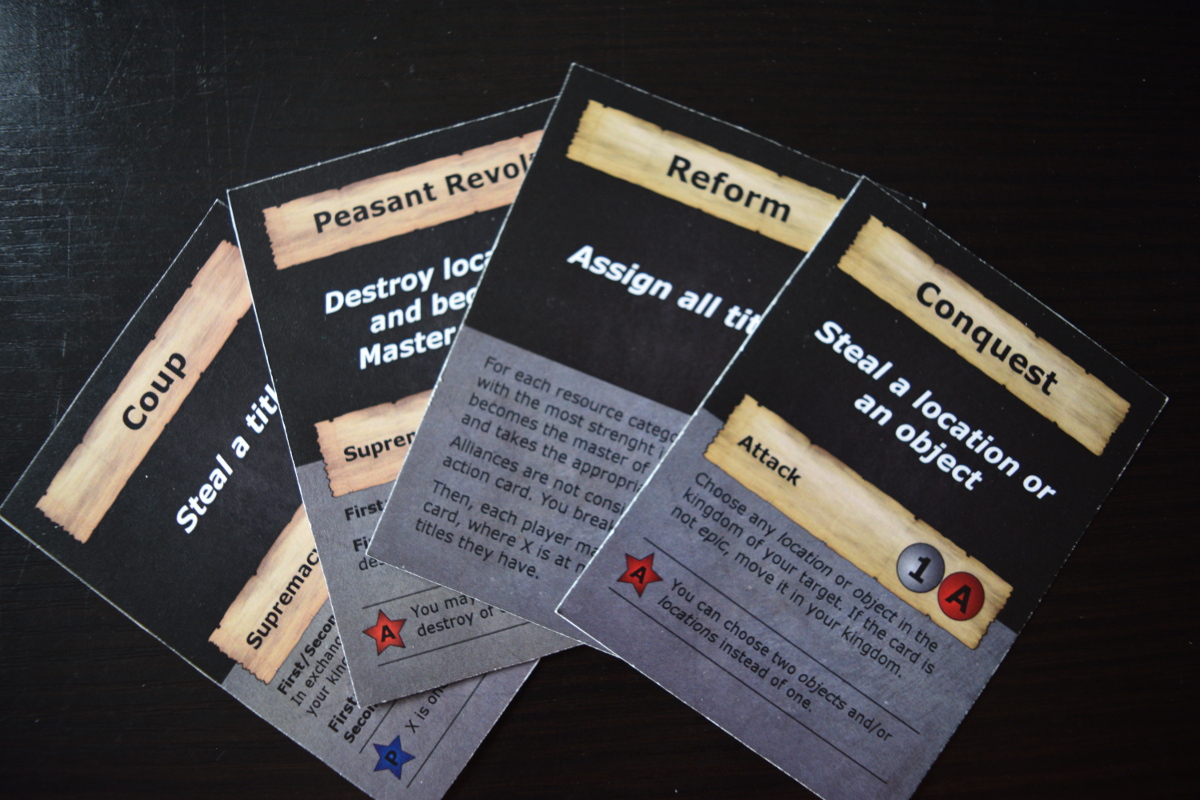 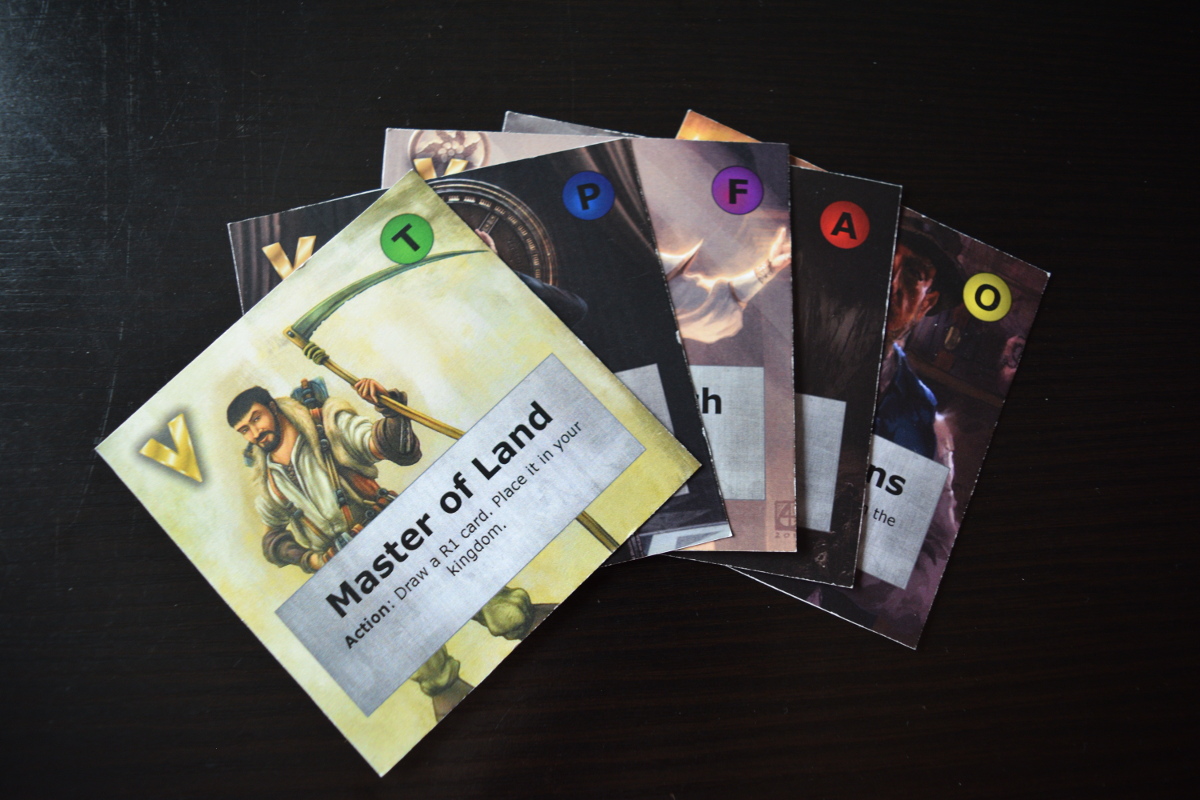 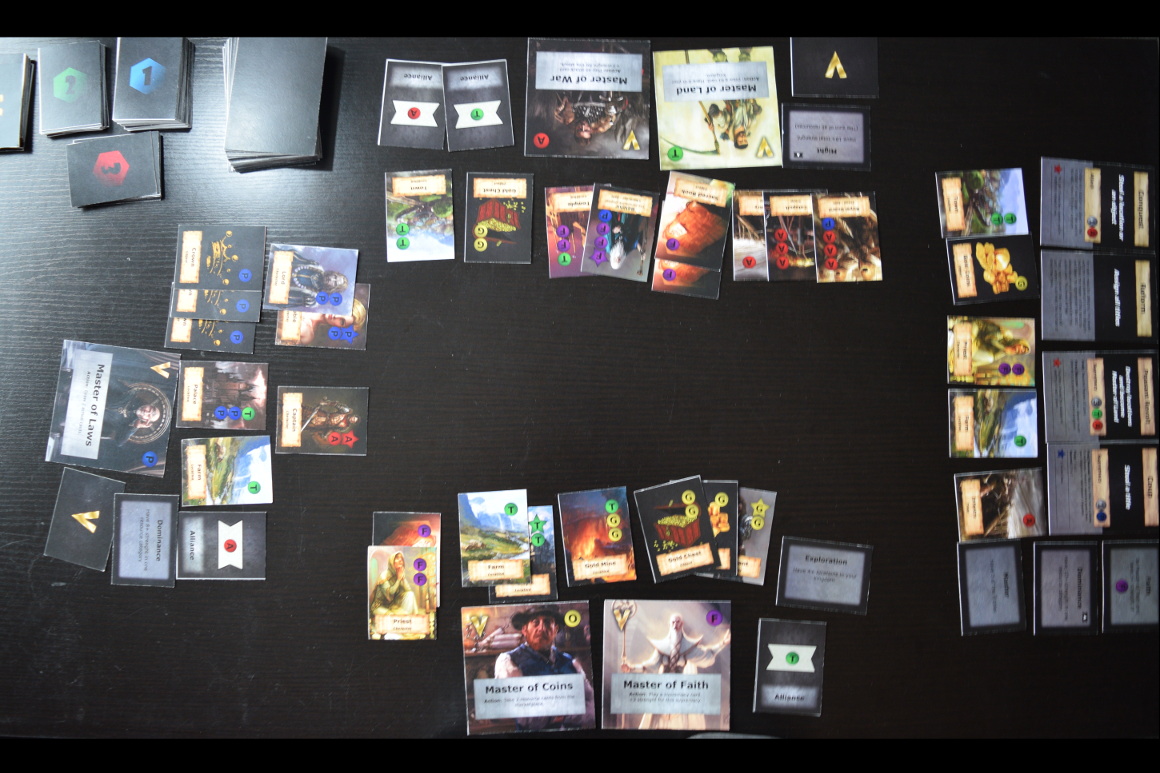 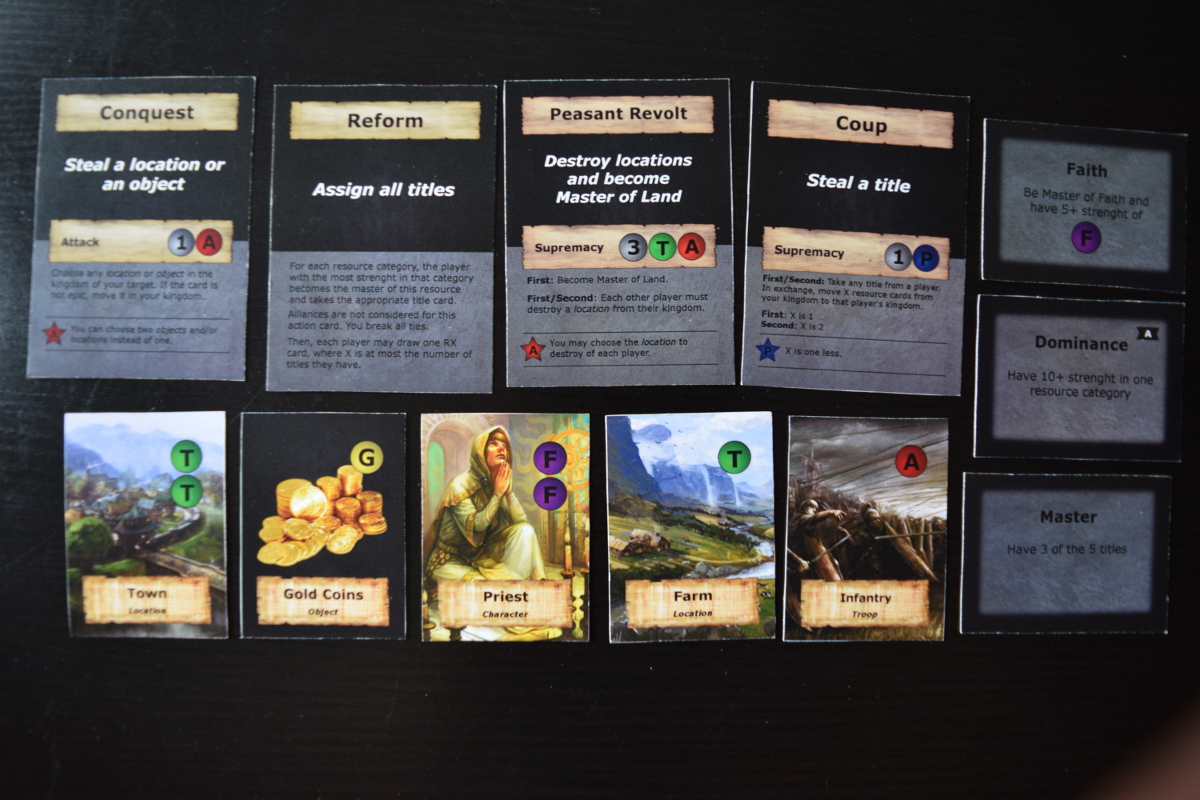 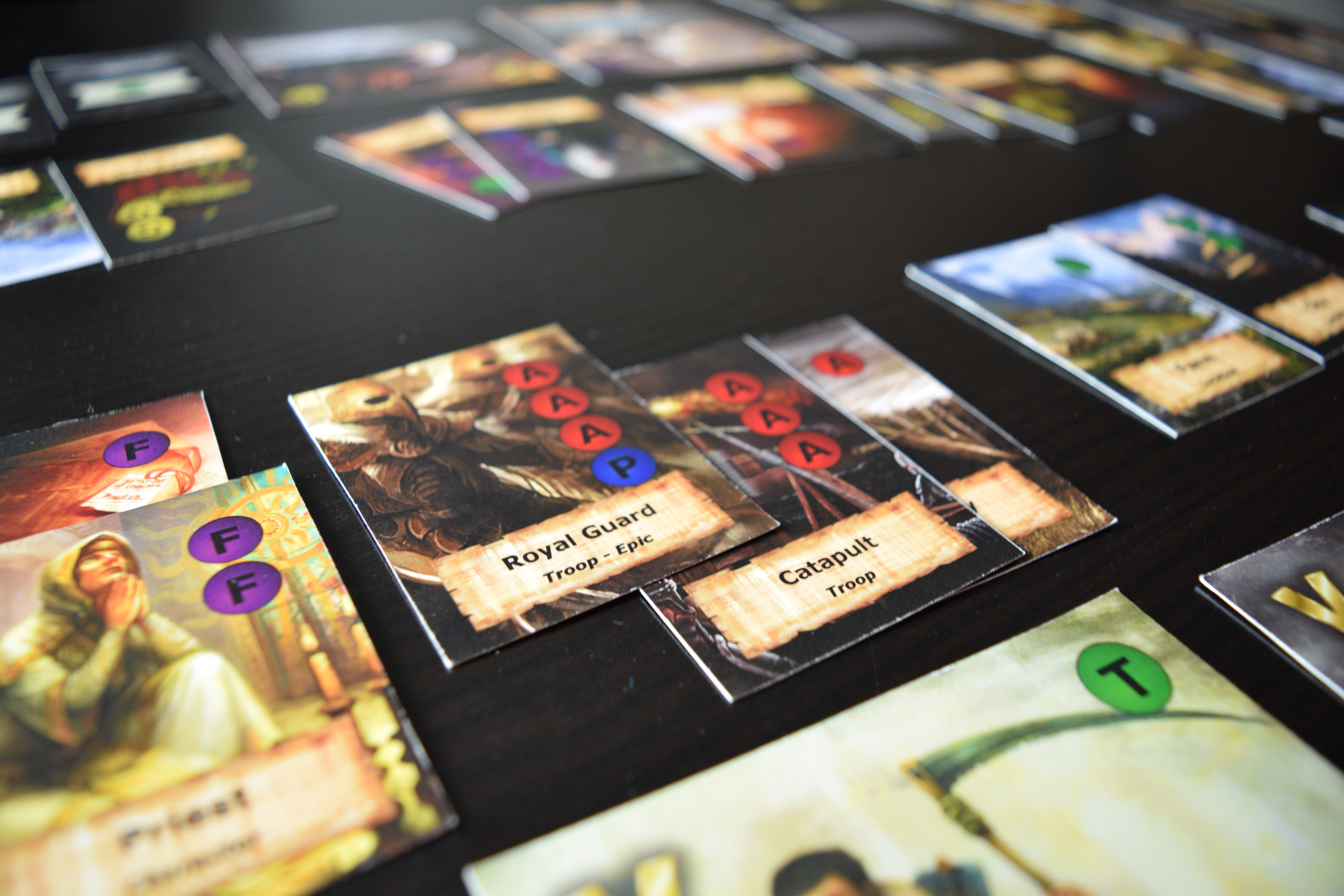 The main idea behind this project is to have a strategy game where players constantly feel the pressure of other players. Having more resources than another player will give you an advantage over that player.

There are 5 resources in the game to make sure one player isn't always totally ahead and that each player has a chance to be ahead in one of the 5 categories: army, gold, power, territory or faith.

Each of the 5 title (council member) is associated with one of the resource type, and that title will break ties for actions related to that resource, giving some kind of diplomatic power to that player.

Alliances allows player to work together and gives them a big edge but also open breaches for punishing betrayal.

I produced a prototype that has already been tested, but the project is on-hold since I don't have the budget to produce the art of the cards. Once that is done, I would self-publish it using crowdfunding.

Titles are the core of the game and pass from one player to the other during the game. There are 5 titles, each one associated with one of the 5 resources of the game: army, gold, power, faith, territory.

Titles gives you a unique special action, a victory point, and the ability to break ties for attack and supremacy cards of the same resource. Many action cards allow to steal a title to another player. The Reform card, for instance, will reassign each title to the player with the most strength in the associated resource.

The first player that get 5 victory points (via titles or objectives), wins the game.

Resource cards indicate the prosperity of your kingdom. Using actions, a player can get resources from the market or put resource cards face up on the table in front of him. These face up cards are now the resources owned by their kingdom.

Action cards represent powerful deals, attacks and treachery a player can do. There are 3 types of actions: attack, supremacy, normal.

Attack cards can be used against any player with less resources of the corresponding type in their kingdom. Attacks usually allow you to steal resources, titles, or to harm the other player.

Normal cards have less powerful effects but can be played by anyone.

One player getting the 5 titles will automatically end the game and win.

But there is another way of gaining victory points. Each player can have one active objective in front of him. When they complete that objective, they can turn the card face down to get a victory point.

Players can use their action to make alliance with other consenting players. Each alliance is only associated with one type of resource (army, gold, power, faith or territory).

Players will share their resources of the selected type when they have an alliance. When two players have a gold alliance for instance, if one has 5 strength in gold and the other has 4. Then they both have 9 instead!